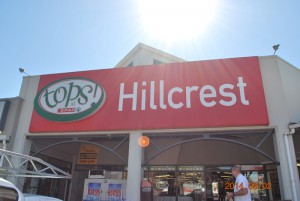 Not Your Average Bottle Store

We met up with Mike and his team to chat about what he terms “A craft beer revolution in the highway area“. And we must agree! Mike has accomplished having the largest variety of South African craft beer on sale in a single fridge. When you walk into the fridge to see what is on offer, you actually don’t even know where to start. That is why we love coming back again and again and again. Simply put : there is no other bottle store that comes close!

Tops HillCrest started selling local craft beer just over a year ago, but it wasn’t an easy start. They had trouble finding product, and the biggest challenge was in creating their own supply chain for the South African craft beer. They started with some local breweries at first (Robson’s and Standeavan), and then branched out to some of the more popular Cape breweries, with the help of the great book African Brew (which we highly recommend!). They also couriered the beers in directly from the breweries at quite a high cost, which meant much lower profits.

Mike also got some help from a local beer fundi, Holger Meier and their South African craft beer range started to grow. Distribution points were then setup in Capetown and Joburg to help with logistics. From there, things started to really take off, and they started building a loyal clientele, that shared the same passion for local craft beer.

Customers Are Blown Away

Mike says the customer feedback has been tremendous. Customers are “blown away” by what is on offer and that in turn motivates Mike and the crew to find more breweries and source even more beer to grow the range. They currently source beers from over 15 South African craft breweries, and this number grows almost every week.  On a side note – we wanted to try every new craft beer that came into the store, but we fell behind and eventually just couldn’t keep up! We still plan to try every craft beer that is available in SA!

We asked Mike if he was a craft beer fan, and we were happy when he answered with an emphatic “Yes!”. His favourite at the moment is the Baidadige Buchu by the Dog and Fig brewery, which comes in a champagne bottle. Followed by Gallows Hill IPA (both of which you can see him holding in the pic below). 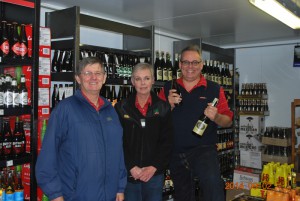 Mike believes in supporting the little guy, and that is why we  in turn, will continue to support Tops Hillcrest. We urge you to do the same. Mike also asks that if you have your own micro brewery and want to start selling your beer, get in touch with him ASAP. His details are at the end of this post.

To Mike, Ingrid, Allan and the Tops Hillcrest crew, thanks for always being so friendly and helpful – it really makes a difference. And thanks for being at the forefront of the South African craft beer revolution – we love your work. Carry on doing what you are doing, and we will see you soon to stock up our fridges.

To our readers, if you live in the Durban area, do yourself a favour and make a trip up the hill one weekend and try some new local craft beer. I can promise you that your local bottle store cannot match what Tops Hillcrest has on offer.